Taking a cue from the stock-market circuit breaker

It may sound counterintuitive, but those 15-minute timeouts should reassure you. It means the system is working as intended to manage the wild emotions that lead to volatile market swings.

“When markets are so emotional, it’s best—either on the upside or the downside—to step back and take a brief time-out,” says Bob Baur, Ph.D., chief global economist for Principal®.

That’s why the circuit breaker also can be a good model for individuals—whether they’re saving for retirement or something else. It’s natural to worry about the coronavirus pandemic and its influence on financial markets, but the fundamentals of the 2020 economy are much better than what led to the 2008 financial crisis.

When markets are so emotional, it’s best to step back and take a brief time-out.”

“The scenarios are vastly different,” Baur says. Housing prices and household debt were the root of the problem in 2008—not so today.

“It just doesn’t seem that consumers are going to shut down the way they did in 2007, ’08, and ’09,” Baur says. “That should mean unemployment could stay much lower—even if we have a mild recession.”

Pauses in stock trading date back at least to the 19th century and the assassination of President Lincoln. As technology became more sophisticated, the New York Stock Exchange circuit breakers were installed after “Black Monday,” Oct. 19, 1987—a single-day drop of 22.6%.

But technology also exacerbates some of the volatility, Baur says.

“There’s a lot more trading driven by behind-the-scenes mathematical calculations and computers, and those tend to accentuate the moves during a particular day, or even from one day to the next,” Baur says.

In other words, think about your long-term plan and don’t get distracted by the daily turmoil.

“Weathering the emotions during stressful times like this, and not taking a really short-term view, can be helpful in the long run,” Baur says. 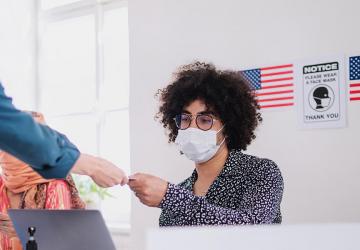 Economic update: 'The long-term trend has been upward' Our thoughts on recent market volatility

The following commentary represents the opinions of Principal Global Investors. It should not be considered investment advice. No forecast based on the opinions expressed can be guaranteed and may be subject to change without notice. No investment strategy, such as diversification, can guarantee profit or protect against loss.