The decade that was: Running bull can’t catch pension liabilities

It’s January 1, 2010. An old bull and a young bull are standing on the hill overlooking a field full of defined benefit (DB) pension liabilities.

“You know”, said the young bull as he anxiously paced back and forth, “I think we should run down this hill and fund all of those liabilities.”

After a long moment of reflection, the old bull shook his head and snorted, “No. Let’s walk down the hill, because we’re never going to catch those liabilities anyway.”

Unfortunately, as we review the decade that was, it seems the old bull was right. Despite an entire decade of stampeding secular bull market returns, a typical pension plan likely has very little to show in the way of funding status improvement. That’s because liability returns did some stampeding of their own thanks to gradually declining bond rates throughout the past ten years.

The chart below presents cumulative returns of a typical “traditional” pension portfolio (60% equities and 40% core bonds) versus a typical pension liability since January 1, 2010. An alternative LDI (liability driven investment) portfolio 20% equities and 80% long bonds is also shown for comparison. 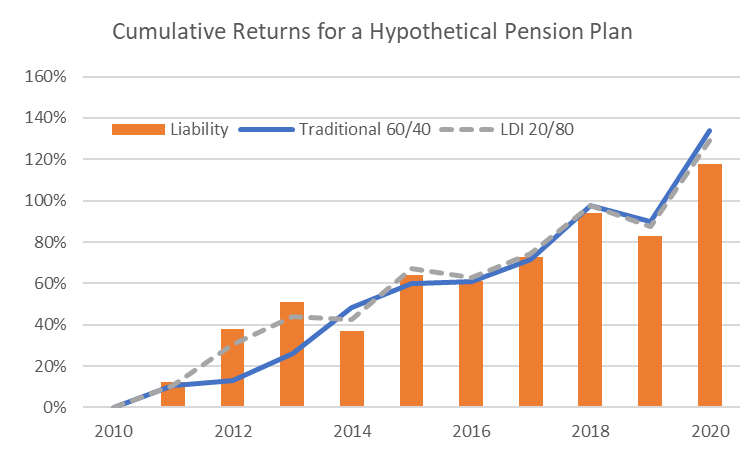 After a somewhat tumultuous start, cumulative returns are surprisingly similar despite a historically strong equity decade (capped by a thoroughly impressive 2019). Indeed, beginning in 2015 the cumulative returns are close enough that one might incorrectly conclude the intent of the traditional portfolio was to track liabilities. (“Accidental hedging”, if you will.)

But the objective of a traditional allocation at the dawn of 2010 was not to hedge liabilities, it was to outperform them. If sponsors wanted to hedge, they would have adopted an LDI strategy based on long duration bonds (the DB investment equivalent of walking down the hill.)

A bull running on a treadmill

Cumulative returns under both portfolios ultimately outperformed liabilities slightly for the decade. But since most plans started 2010 with higher liabilities than assets, did this relative outperformance really help in terms of funding ratios and real dollars?

Frustratingly, the answer is probably “no”. Based on the annual asset and liability returns underlying the chart above, the funding ratio of a typical hypothetical plan (starting 2010 assets of $90, liabilities of $100, and annual benefit payments of $5) wound up exactly where it started under both portfolios, despite ten years hard equity running. The only difference is that the journey under LDI was much less exhausting. 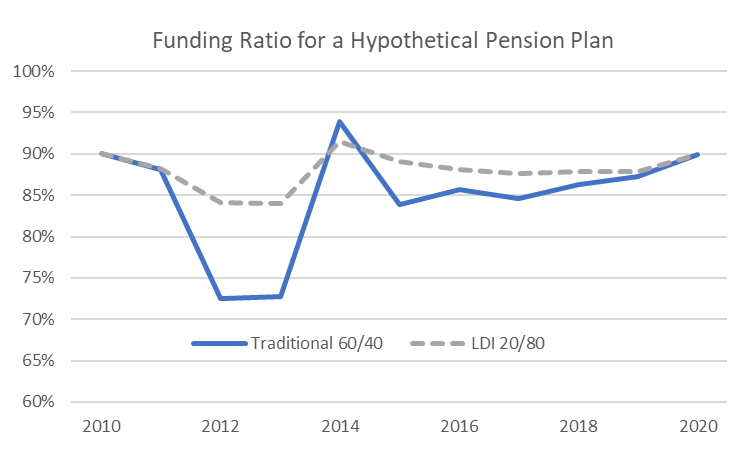 (I’ve assumed no contributions for this simple example, which is not realistic but does help to isolate the role of returns on funding ratios. An alternative way to think of this is that any improvement in funding ratio for the decade was probably driven by plan sponsor contributions.)

So all of the young bull’s running has not gotten him any closer to funding those liabilities (he’s actually about $5 further behind on a dollar basis). And as we enter the new decade, many watching him run predict he could tire soon and fall even further behind.

The old bull’s LDI strategy hasn’t gotten him much closer, but at least he can continue walking for as long as necessary without much risk of further lengthening his journey. 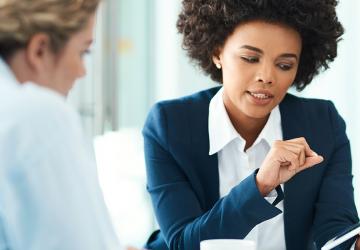 2021 off to an epic start for DB risk takers

Mike Clark is a fellow of the Society of Actuaries (SOA) and a member of the American Academy of Actuaries (AAA), who is frankly a little disappointed with where your mind went while you were reading the opening of this blog.

1 Standard & Poor’s 500 Index is a market capitalization-weighted index of 500 widely held stocks often used as a proxy for the stock market. S&P 500 is a trademark of S&P Global and is used under license. Source: FactSet

4 Bloomberg Barclays Long-Term Govt/Credit Index includes those indexes found in the Government index which have a maturity of 10 years or more. The returns we publish for the index are total returns, which include reinvestment of dividends. Source: FactSet