A wise man once said, “If you want to kick a can down the road, pave the road first so it’ll go farther!” Actually, I’m not sure if anyone’s actually uttered those words, but it stands to reason. Cracks and potholes can certainly affect your distance.

Fortunately, the Infrastructure Investment and Jobs Act (IIJA) signed by President Biden on November 15 promises to address both of these issues. The massive bill (1,039 pages on my copy) directs funding to a myriad of infrastructure needs: some traditional (railways, bridges, ports), some technological (high speed internet and electrical grids), and some arguably not infrastructure at all.

When most American taxpayers think about the word “infrastructure” they think of roads. Indeed, highways and roads take center stage in Title I of IIJA, which will hopefully soon lead to smoother commutes for anyone still doing that.

One topic that doesn’t jump to mind when “infrastructure” is mentioned is defined benefit (DB) pension “funding stabilization”, but there it is on page 910! In one of its shorter sections (number 80602), IIJA kicks the pension funding relief can five years further down the road than the American Rescue Plan Act (ARPA) did just eight months before.” IIJA represents the fifth iteration of funding stabilization since 2012. Read more about the first four in our previous blog, Will Fourth Time Be a Charm?

IIJA punts the ARPA schedule an additional half-decade down the asphalt. The 95% multiplier is now in effect through 2030, with the ultimate 70% multiplier not scheduled to arrive until 2035. (Look at that can slide! Smooth!) The minimum possible effective funding interest rate through 2030 is now 4.75%, whereas market value bond rates are running closer to 3%*.

For illustrative purposes only based on IIJA and ARPA.

The reason pension funding appears in an infrastructure bill is the usual one, revenue. The projected cost of IIJA is well over $1 trillion, so Congress needs sources of income to cover some of the outlays. Pension funding has historically been popular when the hat gets passed. Alignment of the 10-year budgetary scoring window and the length of the 95% multiplier period coincide, but certainly isn’t coincidence.

Circuitous government revenue logic holds that reducing tax-deductible sponsor contributions results in increased business income tax to offset other costs. It also extends the life expectancy of frozen plans, lenghthening the horizon of expected PBGC premium collections (which are still counted in budget scoring as I write this, though they shouldn’t be since PBGC funds aren’t available for general spending.)

Kick the funding can?

Without doubt, IIJA completes the long retreat away from market value pension funding that began in 2008 with the Pension Protection Act. For all intents and purposes, pension funding volatility is a thing of the past as sponsors now typically enjoy cash predictability and flexibility.

Flexibility brings responsibility, however, which will require fiduciaries to put more thought and effort into crafting pension funding policies that meet their objectives rather than blindly following IIJA’s minimum schedule. This is especially true for frozen plans looking to terminate, since minimum contributions disappear long before assets are sufficient to settle obligations through lump sums and annuity purchases.

Thanks to IIJA, the pension funding road appears wide and smooth, and the funding can is sitting at sponsors’ feet. The question now is whether or not to kick it? 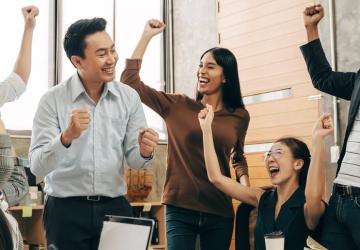 Mike Clark is a fellow of the Society of Actuaries (SOA) and a member of the American Academy of Actuaries (AAA); the road to attaining these certifications was not always smooth!