Stop me if you’ve heard this one before. Six blindfolded men wander into a room occupied by an elephant. One by one they touch parts of the huge beast and declare what they perceive it to be. “It’s a fan!” said the man who touched an ear. “No, it’s a snake!” said another who felt the trunk. “A wall!” declared a third feeling the animal’s side. The rest opined it to be a tree, rope, and spear based on their encounters with a leg, tail, and tusk.

The disagreement led to a spirited debate which developed into a heated argument about what was actually standing before them. Just as it seemed things might get physical, a seventh man appeared at the doorway, removed his blindfold and declared unsurprisingly, “It’s an elephant!”

The original version of this story dates back thousands of years, yet a version of it still happens on a regular basis here in the 21st century whenever defined benefit (DB) plan sponsors approach the insurance market to purchase pension risk transfer (PRT) annuities.

The current process for obtaining PRT quotes can be somewhat opaque for plan sponsors, providing only a few fleeting impressions of market pricing.

A typical PRT search works something like this. After deciding what portion of their plan to annuitize, a plan sponsor engages a consultant to conduct a search. The consultant narrows the field of potential insurers, then sends data to the bidding insurance companies to obtain preliminary pricing.

Determining an appropriate premium for accepting lifelong pension responsibilities is a serious commitment for insurers, so it often takes weeks or even months for quotes to be received. PRT markets are currently flooded by increased demand driven by higher interest rates, slowing quote delivery even further.

Eventually, several interested insurers respond with initial prices to compare. After comparing these quotes and asking clarifying questions (a process that can take up to a month), the consultant usually provides one more chance for finalists to provide their “last-best” PRT prices. From these, one insurer is chosen to place the ultimate annuity. Contracts are often, though not always, awarded to the lowest priced provider. Read more about other considerations in For pension risk transfers, it’s safety first.

The plan sponsor in the example above has worked through a process to arrive at what they believe to be a good choice, but their decision is based on incomplete data – static measurements at two arbitrary dates. Like the blindfolded pachyderm-pawers, this can lead to conclusions that seem optimal based on limited observations even when they are not. 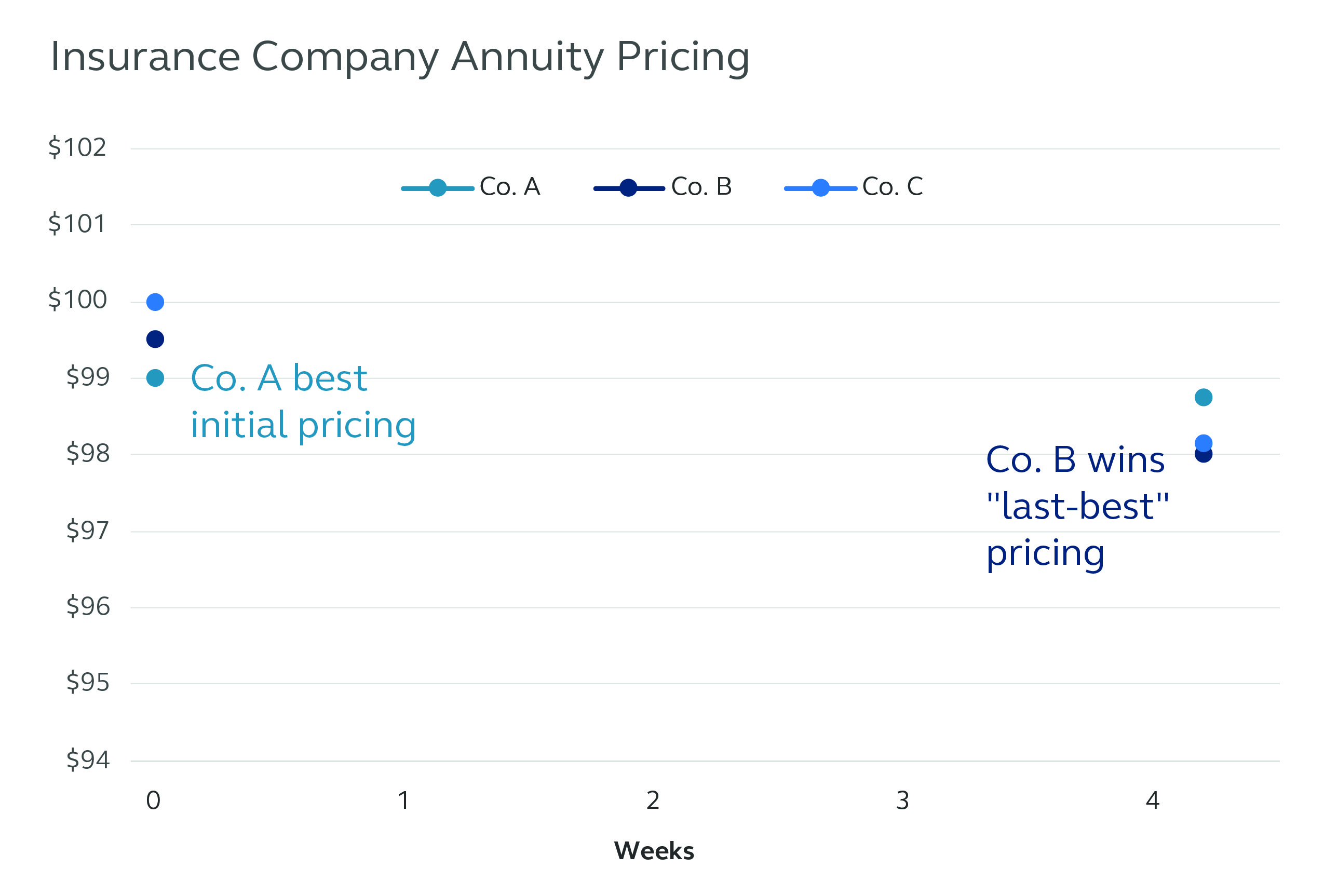 What if one of the insurers had an even better price at some point throughout the process, but it was unseen? For the next exhibit, we now assume that Company C has implemented technology allowing them to quickly produce an initial quote and then provide continuous real-time actionable annuity pricing. (The other two insurers have yet to implement this tech.) Based on this improved pricing transparency, we see that Company C actually had the lowest price at several dates not previously recorded, a fact not realized from the two original static observations. 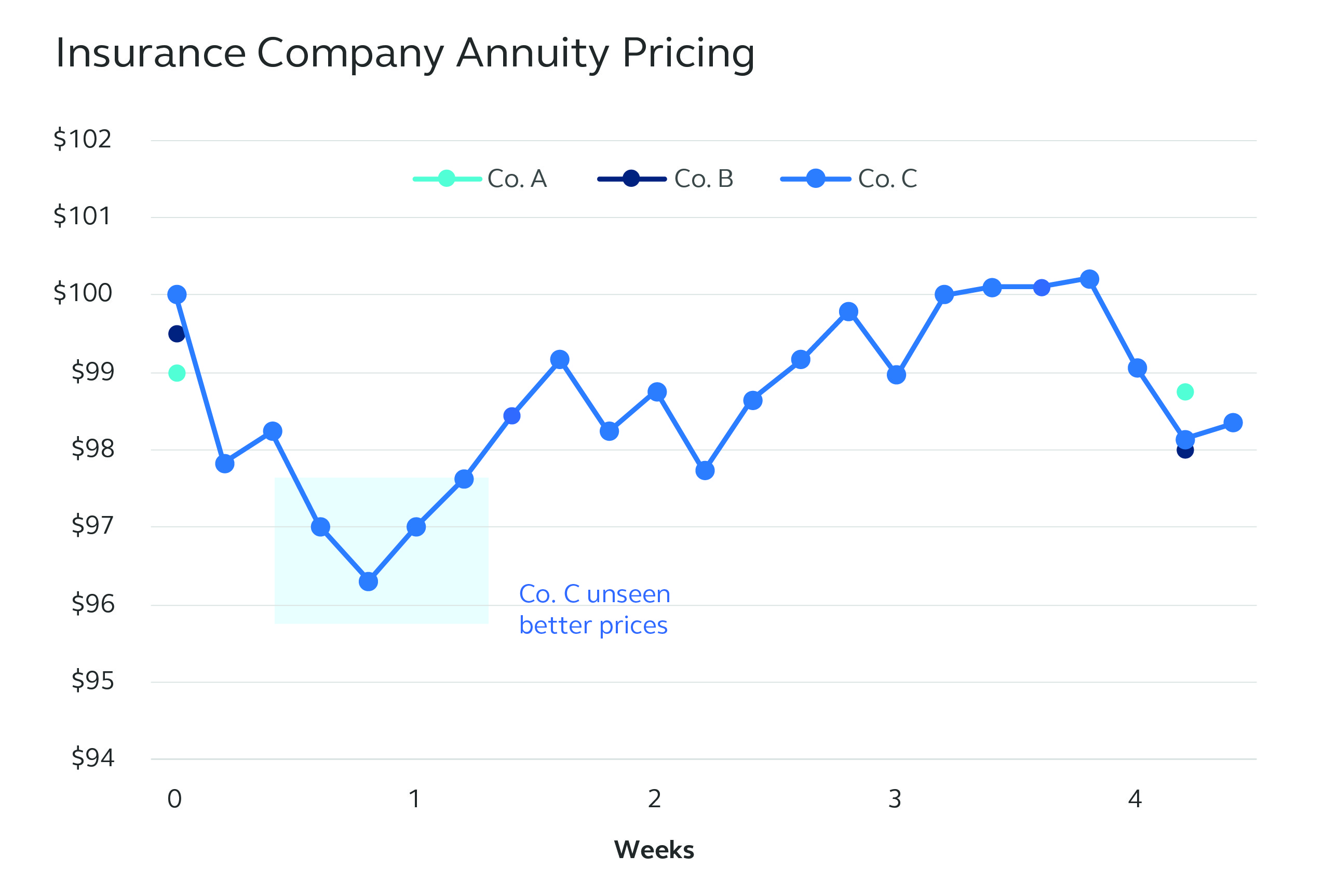 Besides being a reasonable expectation in a technologically instantaneous world, this type of pricing transparency would appear to hold enormous benefit to plan sponsors and enhance the value consultants bring to the PRT placement process. The ability to know real daily prices between an initial quote and a static final decision point can pay off financially. All that is needed now is to put such a model into practice.

To wrap up my story: the other six men simultaneously removed their blinders and nodded in disbelief. It was so obvious now! How could they all have missed it? “Do not feel bad,” spoke the seventh, “You reached the best conclusion you could have with the information available to you.”

Now that everyone could see the full picture clearly the conclusion was self-evident. There was indeed an elephant in the room, and that elephant was a blog metaphor for PRT pricing transparency all along!

And then the seven sat down and finally decided to start talking about it. 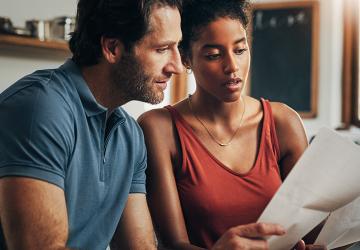 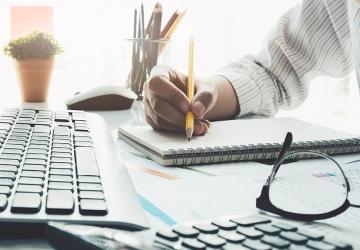 A rough ride for smoothed pension assets in 2023? 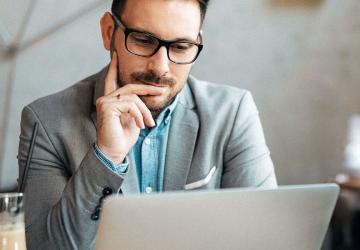 When nothin’ is a really cool hand

Mike Clark is a fellow of the Society of Actuaries (SOA) and a member of the American Academy of Actuaries who wonders if those blindfolded guys were also wearing nose plugs.

The subject matter in this communication is educational only and provided with the understanding that Principal® is not rendering legal, accounting, investment or tax advice. You should consult with appropriate counsel, financial professionals, or other advisors on all matters pertaining to legal, tax, investment or accounting obligations and requirements.